Its custody is entrusted to the Regional Province of Messina, which aims to preserve the natural vegetation and protect wildlife. There are 13 paths that reach the summit of the volcano and that, in addition to offering beautiful landscapes (Pollara and its setting, the other islands around Salina, Sicily’s coast), they will give you the opportunity to observe the vegetation of the island.

Two are the main paths:
TREKKING PATH VALDICHIESA– MONTE FOSSA DELLE FELCI
The most common and easiest path to reach the summit of Monte Fossa delle Felci is the one that starts from the small town of Valdichiesa. Behind the Santuario della Madonna del Terzito, a main path 8 km long will lead you to the top of the Mount. The path can be shortened by taking a series of steps that occur along this main path. Once reached Monte Rivi refuge, 2 paths will occur: the one on the left leads to Malfa, while the right one continues the ascent to the summit.
After a few more meters you will reach another junction that takes on the left to Serra del Capo and on the right hand continues the climb to the top. In this area dominates a dense vegetation cover.
In addition to the chestnut tree, you also see small areas of pine forest. Two interesting species, characteristics of the Mediterranean mountain environments, dominate this area: the buttercup (Ranunculacea Ranunculus monspeliacus L.) and camedrio (Teocrium chamaedrys L). Reaching the top through the edges of the crater, about 600 meters wide, you can admire the beautiful landscape of the six islands, the Sicily coast towards Mount Etna, Calabria, the towns of Salina and Malfa lapped by the blue sea (favourable weather condition).
Walking along a trail that leads to the thick pine forest of Monte Fossa delle Felci, you arrive at the center of the crater. Just further down you begin the descent back through the same stages.
At the first junction turn right and at the second intersection you start right down to S. Marina or continue to the junction of the trail to Malfa.
TREKKING PATH LENI- POLLARA
Another suggestive path is the one from Leni to Pollara, through the summit of Monte Porri. The route begins in the ancient terraces and olive groves above the village of Leni in Damice road, a path leads up to the summit of the Mount..
Here the vegetation is less luxuriant than the Fossa delle Felci one, because the old volcano has suffered a major fire in 2007.
After a climb of 600 meters you reach the summit, from here you can see almost all the islands and the three villages of Salina: Rinella, Malfa and Pollara.
The descent to Semaforo is pleasant, the track is easier and the vegetation is different from the opposite side. The landscape offers breathtaking views of the crater, where the village of Pollara is situated. Once reached “Il Semaforo”, you can get through the main road to Pollara. For walkers, the walk can continue, if you pass the church of S. Onofrio a road leads to the stairs to the bay of Pollara and of the ancient port. 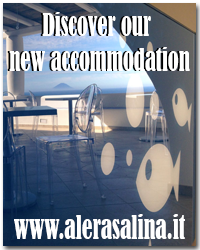